Participants will be shown how to prepare a non-fermented indigo vat and four SHIBORI techniques: arashi, kumo, etajime and a clamped method. After dipping a couple times to achieve a deep shade of indigo, participants will enjoy the surprise of seeing everyone’s unique creations and go home with four very beautiful white and blue cotton napkins. 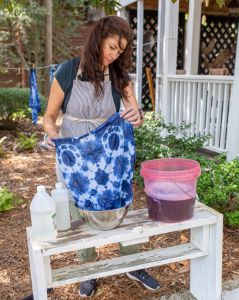 Caroline HarperInstructor
Caroline Harper launched CHI design indigo in 2014 after studying indigo and resist-dyeing in Japan. A native of France who has lived in South Carolina much of her life, she developed a deep appreciation for indigo as a connection to the past and its potential for a bright future. She creates intricate textiles for the home and for personal fashion using only natural fiber and natural indigo dye pigment from plants (Indigofera suffruticosa) she and her team grow and process in and around Charleston.

Caroline’s work has been featured in Southern Living, Columbia Living Magazine, Turkey Red Journal, and Charleston Magazine. She earned a American Made designation by Martha Stewart, was semi-finalist with Garden & Gun Magazine’s Made in the South Awards, and was named an Innovator with Apparel Magazine. Her work is featured in local museum shops and galleries in the Lowcountry.

For 2022, she is focusing on home and fashion design, wedding accessories, Farm-to-Fabric Indigo Harvests and Workshops along the Southeastern coast and developing indigo kits for middle schoolers.