Much of my work over the years has reflected an interest in imagined architectural facades on one hand, and the idea of interiors on the other.  Recalling growing up in my mother’s boarding house, the idea of home, structure and rooms has played a role in what I do.  For sure she took in Cuban and Hungarian refugees; a cab driver from New York; and all sorts of roomers.  As a small boy I never thought of any of this as unusual in what was the mill town where we lived.  For that matter, I never thought of a mill town as being different.  There were just houses where peopled lived and we all needed a place to live. We still do and that is one thought that lives in this work.  Yet when push comes to shove, these acrylic paintings and graphite drawings rely on a contrast between mechanical drawing and surface, between abstraction and imagery.

The series The Neighborhood was completed after a trip to South Africa to plan an exhibition comparing American Outsider artist Joshua Samuel with South African Outsider artist Nukain Mabusa. However, what left an impression from my time there was the sustainability of townships and the overall disparity of resources that we also take for granted. 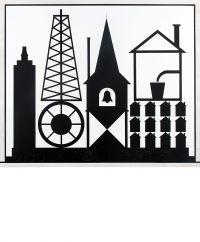 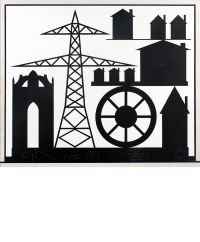 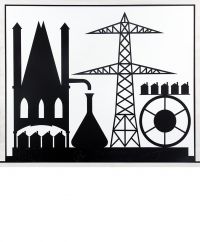 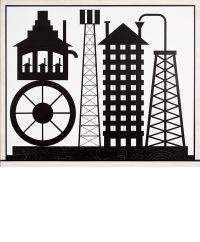 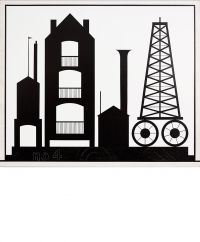 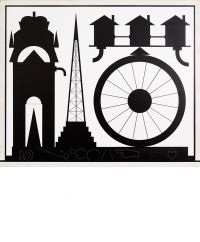 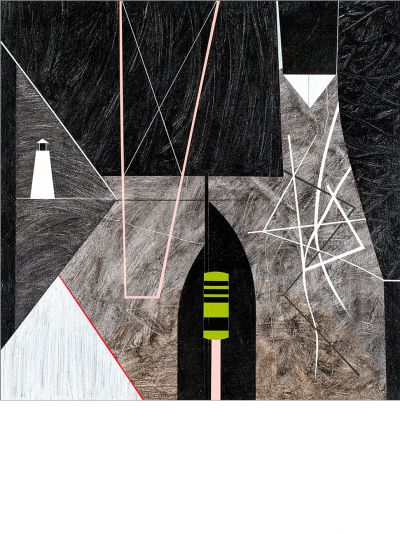 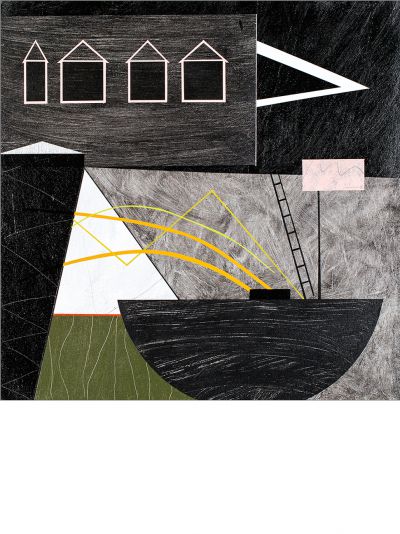 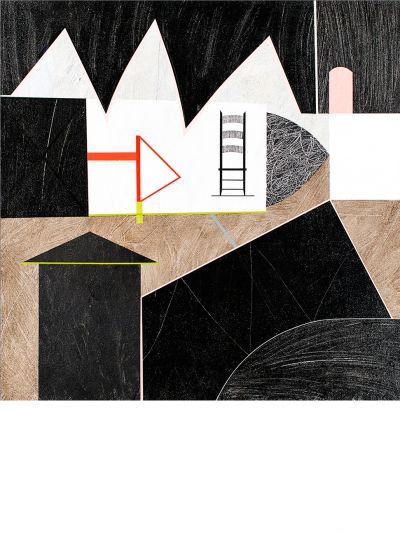 en route to hamlet was an important body of work for me. Comprised of close to 200 canvas panels, it typically hung in a frieze-like configuration and established a free-floating visual narrative.  They often depicted images from my outside road travels or ideas that were part of my interior imagery.  Hamlet refers to any town, but more specifically to the birthplace of John Coltrane.  The series also recalled the value of symmetry that I explored during my graduate school experience at USC in the late 1970s. 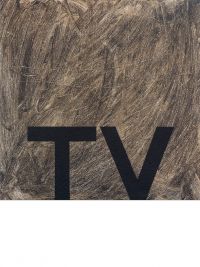 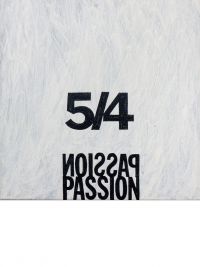 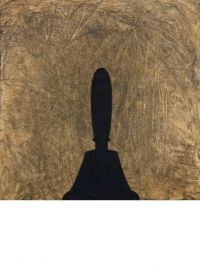 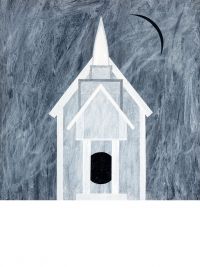 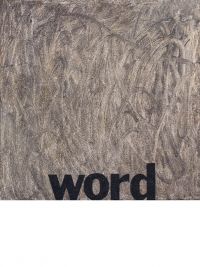 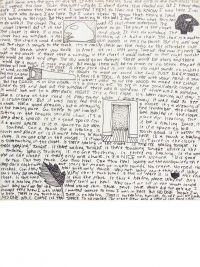 en route to here established a series of works that allowed me to look at interior space while using imagery that was part of my vocabulary.  There is a total of ten paintings that comprise en route to here and all were completed during a residency at McColl Center for Art and Innovation in Charlotte, N.C. 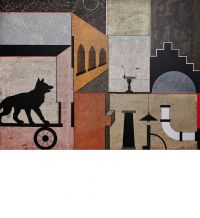 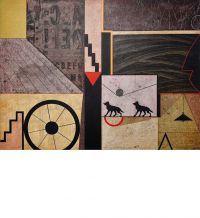 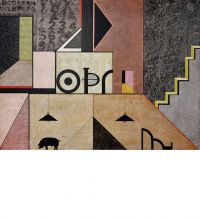 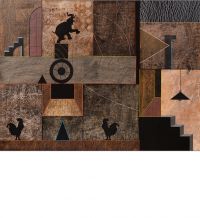 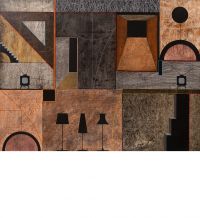 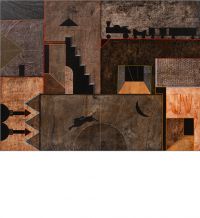 I included a selection of Corner Drawings even though they are from thirty-five years ago when I was teaching at Barry University in Miami.  I had been working on large canvases when I herniated a disc and in lieu of surgery opted to remain horizontal for a couple of months. I read, watched the summer Olympics and began to draw using my old mechanical drawing tools.  This series reinitiated my interest in mechanical drawing which had been so important to my identity during my high school experience.  The techniques and skills I learned through mechanical drawing are exhibited in all the works in this exhibition. 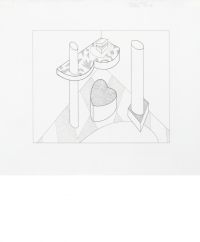 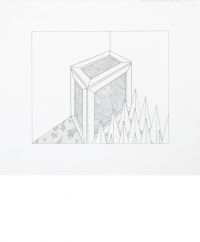 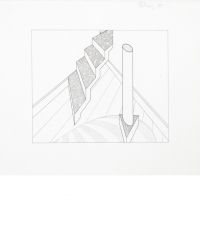 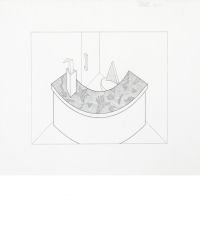 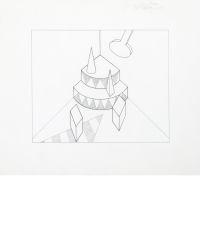 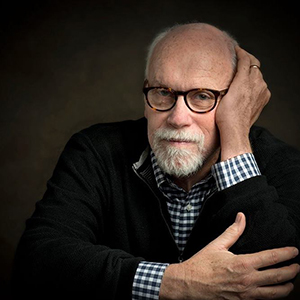 Tom Stanley is a visual artist who has lived in Rock Hill, South Carolina for the past 30 years.  Early on he worked in New Jersey and New York in the wall accessory industry. After earning an MA in Applied Art History and an MFA in Painting from the University of South Carolina in 1980, he served on the faculties of Arkansas College (now Lyon College) in Batesville, Arkansas and Barry University in Miami, Florida. In 1985 he returned to North Carolina to direct the Waterworks Visual Arts Center in Salisbury. He became the first director of Rock Hill’s Winthrop University Galleries in 1990. From 2007 to 2017 he served as chair of Winthrop’s Department of Fine Arts.

He has had the opportunity to work on public art projects including the design elements for the CATS light rail Tom Hunter Station in Charlotte. He is a recipient of Winthrop Universities Medal of Honor in the Arts, and South Carolina’s Elizabeth O’Neill Verner Ward. In spring 2018, he completed a six-week residency as visiting artist at the Gibbes Museum of Art in Charleston, and worked with Casa-Museu Abel Salazar, University of Porto in Portugal, on an installation for their chapel, Layers: On-Site Installation. August 2018-April 2019, he completed an 8-month residency at the McColl Center for Art + Innovation in Charlotte where he also served as a visiting curator.  In February 2020 he was a fellow at the Virginia Center for the Creative Arts.

If you’d like to help Oconee Cultural Arts Foundation (OCAF) advance our mission consider lending your support to through a charitable donation, become a member, or get in touch with us about sponsorship opportunities at 706-769-4565.
Donate Now
JOIN or RENEW
Toggle Sliding Bar Area